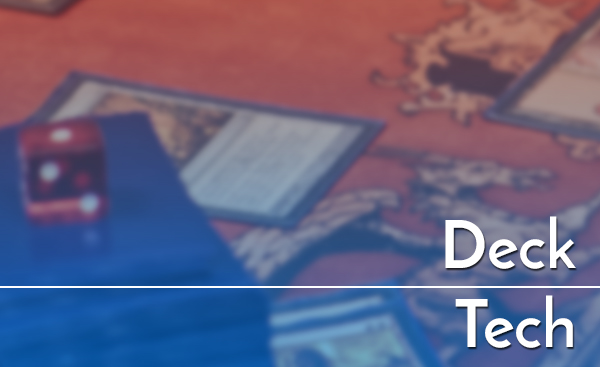 Months have passed since my first piece on building 5C. Months that felt like years. That’s the way it should be I guess. Life happens. But the 5C quest still exists. And you know what: I haven’t changed my current 5C list for about two months. It’s REALLY good. But to get there wasn’t easy and I still don’t play it well enough. No practice, no perfect. But let’s not get ahead of ourselves. Today I will talk about everything I learned along the way. And publish a random list out of the approximately 50 versions. In Part 3 I will talk about the (currently) final version.

Learnings from the 5C asylum:

1) When you build a complicated Highlander deck, that no one has perfected yet think one year. Unless you play every day you simply won’t get the reps in to know anything. A player from Berlin has recently done this with 5C artifact combo. His deck now is good enough to traumatize everyone. And he has practiced playing it forever. The result is that no one else can play that deck because it takes that long to get it right. He’s a year ahead. Period.

2) Mana dorks are overrated in HL. Many people would strongly disagree on this. Some even think that mana dorks are so great turn one that you need to jam them all into your deck. I believe the only deck with the right to do this is mono green. Because combined with ramp the dorks let you do very unfair stuff. In all other decks I say „meh“. Sure they protect you somewhat from nonbasic hate. And yeah you pick up speed. But when you draw them late they are HORRIBLE. And things like Arc Trail, Forked Bolt, Electrolyze and Zealous Persecution are very much a reality. They die.

3) Finding out which color is worth spending double mana on is hard. If you play blue, it’s probably double blue for sure. Jace, the Mindsculptor, Mana Drain, True-Name Nemesis, Vendilion Clique, Dig Through Time. Worth it. Okay. But what is next up? Is anything good enough for 5C? For a while I though it was double white. Elspeth, Knight-Errant, Gideon, Ally of Zendikar, Parallax Wave, Unexpectedly Absent, Council’s Judgment. But I changed my mind. Right now I think it’s double red, but only for Thundermaw Hellkite and Fiery Confluence. Building 5C is hard. I’m pretty sure it’s not double green or double black. But who knows? What I can say for sure is that playing 3 double costed colors in 5c feels very wrong.

4) You have to know if you wanna ask questions or find answers. I definitely like to ask questions. When you have access to basically everything as is the case in 5C it’s very hard to at least outline your deck’s role. At least a little bit. As I mentioned before: Gruul at heart. Also I have gotten the feeling that as creatures are getting better and better not putting anything on the battlefield feels horrible unless you play combo or control. If you play midrange, you need to ask questions. This means you need to be able to be the aggressor and you need to play cards that let you do that. At least I do. I am very impatient. So I play more 1 and 2 mana beaters and power creatures now. They let me get, protect them and do two things a turn.

6) Not all color combinations work turn 2. And yet: Greed is the answer. What? Yeah. So if you wanna play double blue, Baleful Strix and Qasali Pridemage you are in world of mind pain. I can tell you which land you don’t want turn 2: Badlands. But other than that, you are still in trouble. For a while I really worried about what lands would enable me to cast stuff like Baleful Strix, Qasali Pridemage, Tidehollow Sculler, and Abrupt Decay most conveniently. The answer: No two duals let you cast these four cards. But then I realized, that in HL you are faced with such different hands that the only correct answer is: Play all and also add Lightning Helix 🙂

8) Delver of Secrets is unplayable in HL if you wanna win. Maybe in Mono-Blue Aggro. But to me it does not flip often enough. It should be out on the streets of Highlander City with Domri Rade and Collected Company making music to earn a buck.

9) You can play too many can trips. The reason to play 5C is to get better spells for less mana. That said, playing the card selection can trips is still right. Ponder, Brainstorm, Preordain, Serum Visions. Sleight of Hand if you must. But that’s it. You cannot spend mana on Thought Scour, Mental Note et al. Your average card is too good for those shenanigans.

10) Flood is the worst. You can play too many lands. Flooding is horrible and it happens quite often in HL. The answer is either playing more utility lands and hope you hit them as you flood, play cards like Jace, Vryn’s Prodigy that let you discard them or Tireless Tracker who turns them into cards. Consider playing less lands. I hate flooding. Do play Tithe.

11) Not knowing where you are headed is the hardest thing in playing a 5C value pile. Am I the aggressor? Am I the control player? Is it changing? Did it just change? Should I have tapped out? This along the many fetching decisions is something that needs a lot of practice. I haven’t had enough practice, but you need to be aware of this happening during games. You could draw 3 counter spells and no creatures or a hand with just creatures. It’s Highlander. Learn to deal with it.

12) Even if you lose, don’t stop believing when you are onto something. Blame yourself first. I have failed at many large tournaments and I could have blamed it on the deck. But instead I found ways to blame myself. Because I threw away games. False fetch here, forgotten attack there, complete blackout due to decision overload, mulligan fail etc. It happens. I might have easily had the best deck in the room. Face your mistakes. And do not decide the deck is too hard to play just yet. Come on.

13) Don’t change stuff like a maniac. If a card sucks, it sucks. But if you change 10 cards after every FNM, something is wrong. For example, the double-mana thing from #3 you cannot decide after four games. Try 20. Which is still little. Just because you don’t have the mana at the right time once doesn’t mean it’s a regular problem. Just because Elspeth, Knight-Errant doesn’t win right away or Council’s Judgment removes a Loam Lion and no True-Name Nemesis it doesn’t mean you have to cut it. Give the cards a little time to succeed.

So many words. I wish I could write more often, but time is a mother. Regarding the deck I chose for today: It’s version „5C Bananas t“ and was made shortly before I ran out of letters in the alphabet. You can see some card choices that are definitely questionable. And you can see double-white spells. Might have been the best version yet. But I don’t think so. That one I will show next time. Hope the read is okay. See you soon.