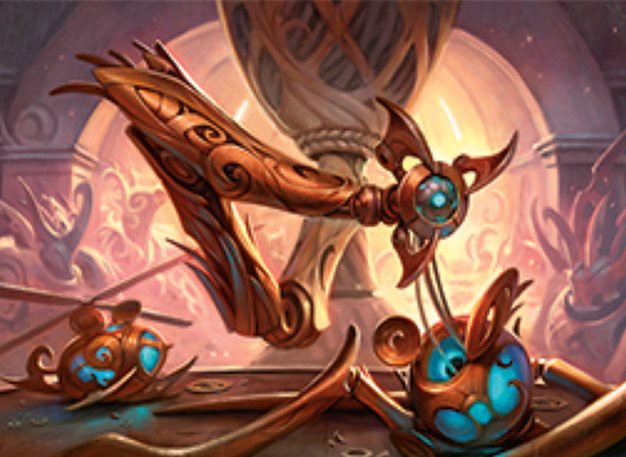 I believe we are entering a new age of HL magic deck building. Sounds too big? Maybe. But there is a lot to think about when looking at the latest card printings. Let’s call it the Mazemind Tome Question.

The topic of redundancy in HL is a big one. Especially Paul Witz has lately advanced this topic with his ultra low curve radical tempo thoughts. It has inspired a lot of thinking on my part, so I’m really grateful for him taking the time to share and spark thoughts.

I think it is totally correct that you cannot overstate the topic of variance for our 100 card singleton format. The variance is insane and minimizing it is at the core of any competitive deck building.

I also believe that with the new powerful cards Wizards has been printing it might be time for a shift in redundancy thinking as the game has gotten a new dimension: Cards that can create card advantage and lifegain, regardless of the game state and make games long. Sometimes they even create a strong board presence as well. But more on that later.

Trying to reduce redundancy starts with mana base, next up is mana curve, followed by card selection and threat density and the underrated one: game state value of cards. There can be an added element of reduced redundancy by playing a combo or haymakers like Blood Moon or Back to Basics that can be „I-win-cards“. The hypothesis here would be: Even if all goes wrong and I draw 4 lands in a row, I can find this thing and win. Of course focussing on combo only on the other hand, leaves you open to do-nothing-hands or Aven Mindscensor losses and therefore might make you a variance victim more often than not. Unless, of course, you actually do have enough card selection and a 2-card combo like Thassa’s Oracle. Then, maybe, you can reliably combo off and be the most steady deck of all. Maybe.

This can all get very confusing quickly. So here’s my understanding of the dimensions I believe matter in reducing redundancy.

1. Mana Base, meaning „Having the right mana for your spells“: There are different ways to approach this. Of course running a mono colored deck will make your mana base pretty steady. There are some that argue 3 color mana bases have better access to the right mana than 2-mana decks. I personally play 5 colors. And while it is maddening, it can be a very steady mana base if you don’t get too greedy and science the shit out of it.

2. Mana Curve, meaning „Not losing because of spells that are too expensive to cast“: There are also different ways to approach this. One is by playing the lowest possible mana costs and therefore always having the mana to cast most stuff. Another is to ramp with elves, lands or artifacts and thereby enabling higher mana costs to be valid options. The third is to drag out the game with cards that prolong the game early, let you hit land drops and then eventually cast more expensive things. This is the Uro, Titan of Nature’s Wrath/Oko, Thief of Crowns/Klothys, God of Destiny/Cling to Dust/Field of the Dead world that we are currently entering. And it might be here to stay.

3. Card Selection, meaning „cards finding the right cards“: This is mostly a blue topic, as blue provides cantrips like Ponder et al. that let you look for cards. It is also Sylvan Library and Faithless Looting and most colors have some tools to manipulate draws or loot through cards. While this is something I feel is ultra important and I feel I cannot exist without at this point it can be outdone by high threat density in some cases.

4. Threat Density, meaning „many cards that do exactly what you want“: RDW is the prime example here, but also elf strategies. There are currently I think 15+ ways to play a turn 1 mana elf effect, making the likelihood of advancing on mana even in a 100 card format very high. If you have ever played against the devastating ramp deck and top 8 regular piloted by the „God of Cradlehoof“ Hendrik that basically doesn’t even play removal and does very powerful things for a lot of mana, you will know what I mean.

5. Game State Value, meaning „cards that always do something good“: This is where I believe we really have to look into reevaluating stuff. Uro, Oko, Retrofitter Foundry, Mazemind Tome, Klothys, Cling to Dust, Shark Typhoon, Gilded Goose, Shadowspear,Hexdrinker … Wizards is lately printing cards that are always pretty good, meaning in every state of the game. There are probably more. And not only that. I believe in the long term they might have the power to singlehandedly stop aggressive strategies that are based on the idea of playing a critical mass of cards that apply pressure early and suck late. Because somehow Wizards acutally slaps lifegain on many of these cards. Because why not. Some people have never liked cards like Delver of Secrets because they are horrible topdecks. Well, they might be getting worse.

When we look at other formats it is becoming apparent that mana curves are going up. Cards like Uro and Oko as 4-ofs are the reason in my opinion. Field of the Dead is a thing everywhere. In HL you don’t have 4-ofs. But you do have time to tutor and your opponent’s hand is also worse as they don’t have 4-ofs in their deck. I recently played a super low mana curve version of 5C to see for myself how it feels to try to beat redundancy in that way. 5C as compared to Paul’s RUG has access to stuff discard and some strong white spells so I figured it should work. And it did work. Until I ran into an ultra greedy Sultai build with a higher curve as well as some Field of the Dead goodness. The low mana creatures felt like a joke. They were so bad in the late game against Uros and Thruns that they felt unplayable to me. My angry reaction to this was to raise the curve and actually try 5C with Back to Basics. The final verdict on this isn’t here yet, as 5C can be anything it wants to be and can change from week to week. But one thing I am quite sure of: Curves are going up and once everybody catches on to the cards like Retrofitter Foundry who can win the game turn 1 and turn 10, we might be looking at a new HL world. A Field of the Dead world.

This is what I have been playing after these latest insights:
https://deckstats.net/decks/11833/1723401-5c-basic-ultra

But Mazemind Tome is going in next. Let’s see what happens.