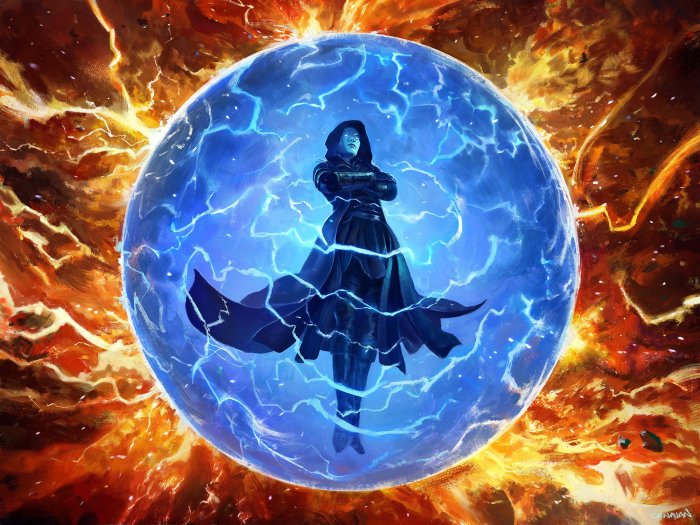 Having followed the Highlander tournament scene mostly as a bystander for the last twelve months, I am very excited to attend the upcoming MGM. Over the course of the last year, several major releases and tournaments have happened, and in preparation for the tournament, I try to weave my observations and theories into an article for you to object, develop or simply to enjoy and forget. For those who read and commented my last piece, I am thankful for the attention it attracted and hope to give you additional material this time around. The article basically consists of my takes on hot topics in today’s Highlander community and will extend on some concepts I have been trying to establish. So, without further ado, lets start off with everyone’s favorite:

I am pleased to have the opportunity to test this version at MGM 15. After giving it some thought, I consider it a necessary and meaningful improvement of the format. Although I believe that this is a very powerful mulligan, it will greatly improve the gameplay experience for it adds another important strategic dimension to Highlander. I was initially reluctant to embrace this particular version, because it is very beneficial for linear strategies that know which hand they want to mulligan into in Game 1. However, since you have a better grasp on which half of your deck you want to mulligan into Game 2 or Game 3, the benefits for reactive or flexible decks are equally strong as it is safer to ship back your hand in case it lacks the required interaction. Therefore, a first big plus for the “Free 7 + London Mulligan” variant is its ability to reduce non-games and increase the number of relevant games.
The second dimension I want to explore is its impact on deckbuilding. This is solely based on theory, and I am more comfortable with some predictions than others, but there are a couple of things worth mentioning. Overall, the increased amount of virtual “opening 7’s” (from two to three, possibly even four) under the Free+London system helps to increase the power-level of your draws. That means you are now very likely to arrive at a six-card-hand with higher quality than most “second 7’s” that were grudgingly kept under the current rule. Depending on your curve and deck type – although I think this applies almost across the board – you can start thinking about slightly decreasing your land count. I, for myself, have decided to skim a land just because of that rule. This variant also incentivizes even more to play cards that are functionally similar instead of relying on silver bullet cards or rather narrow effects. From my point of view, this has always been the key to sustainable success in this format. I have always loosely applied a method of ‘scaling-up’, which means that after figuring out which deck archetype I wanted to build, I analyzed the relative composition of lands, card-draw, removal, creatures etc. in formats such as Legacy and Modern and utilized hypergeometric distribution to arrive at the approximate numbers of certain card-types and effects for a 100-card-singleton format. Having a clear idea of your play patterns in the early turns and knowing which commonly occurring sequences of cards you want to combat or exploit should always guide your deck composition. The point here is that this mulligan rule allows for more distinct archetype formulations. Aggro-decks can now lean even heavier on the aggro-branch, tempo decks have better access to early threats, combo decks can focus more on a particular angle etc. (The impact of this mulligan seems less pronounced for control decks, but I am not a control-player myself and I don’t want to make an uneducated guess.)

Modern Horizons & War of the Spark

Apart from the prospects of a progressive mulligan rules change, the latest set releases clearly constitute a boon for the format. Whereas WAR has brought previously unseen effects for certain colour combinations and filled relevant gaps, MH1 has to be lauded for increasing the redundancy of established archetypes. Just to mention a few cards that I expect to see and perform well at the top tables (apart from the most talked cards such as Teferi, Horizon Lands etc.):
Nissa, Who shakes the World: Currently wreaking havoc in standard, Nissa is a powerful card that immediately impacts the board with 3/3 hasty vigilance creatures. Once you untap, you have an incredibly huge mana advantage which MonoG is able to exploit. Is think she is equally as powerful as her Kaladesh version.
Giver of Runes/ Ranger-Captain of Eos: Representative for recent printings such as Tithe Taker, Siren Stormtamer, Dauntless Bodyguard, Unsettled Mariner, Adanto Vanguard or Legions Landing, weenie strategies seem to have improved on all their weaknesses. Those decks are now more redundant, resilient, disruptive and aggro than ever. I would love to see some dedicated people putting in the hours and perfect that strategy as I think there is a lot of unexploited potential here.
Force of Negation: Clearly not as ‘good’ as its namesake (although Force of Will is beyond ‘good’, broken almost), Force of Negation still is a free counter spell, and this classification alone puts this card several categories above what I see it currently being discussed in in the highlander community. A look at local and regional tournament results shows a slight downward trend in the average mana costs among the top deck-lists. This means that the format overall became a bit faster. This is especially noticeable in the popularity of fast combo decks and in the way other decks now try to establish their advantage in the early game with cards that progressively snowball out of control. In these kinds of situations, the availability of free interaction is often the difference between falling behind or getting ahead. Thus, athough force of Negation is somewhat watered-down, its essential utility to maintain an early advantage remains intact and is therefore vital for Highlander gameplay as it presents itself to me.
A brief note on Narset, Parter of Veils: This card is good, don’t get me wrong. We see it providing a lot of card advantage in older formats, especially in blue mirror matches, and prevents stalemates from ever shifting in the opponents favor. However, playing this card on turn three (on the draw in particular) is just not impactful enough given the diversity of decks and relevant sequences in the Highlander Format. Against many fast decks, it is just a glorified Impulse or a rather expensive cantrip. If you can continuously maintain and recoup your board advantage, an opposing Narset can be more or less ignored. Therefore, I don’t believe she will warp the format to a similar extend as she does with Vintage/Legacy/Modern etc.

An important note beforehand: Metagaming in Highlander is a hot topic. For one, players usually choose archetypes they have refined for weeks, if not months, so don’t expect the overall look of the field to change much. Also, even if you have identified an elephant in the room, the nature of the format does not allow for adding ‘sideboard’ cards geared at attacking a specific kind of matchup. Therefore, I would rather accept a structural weakness in my deck archetype and shift the focus towards improving my strengths even further.
Nevertheless, as you may have guessed, I expect small creature strategies (white weenie, white-blue or white-green hatebears) to increase their presence on the tournament. I don’t like expensive removal, sweepers included, to combat those strategies as they gained more tools to tax noncreature spells, I will try to fit in as much split-burn as I reasonably can and probably commit more to red than I have in the past. Moreover, these cards have the added benefit of never being really ‘dead’ draws. Especially now with people getting excited about newly introduced planeswalkers, splitburn will create even more noticeable impact on boardstates. Another strategy to beat weenie would be to play more and beefier creatures, but I don’t like that option either because it plays right into control’s game plan of gaining card advantage by sweeping the board and is again a very clunky and inelegant way of playing the format.
Another purpose of this section is to contain the excitement around ‘punishing people for their greedy mana bases’. Admittedly, over the last couple of tournaments we could witness declining land counts and fancier color commitments of blue-based decks. But it is as wrong as ever to think jamming Stifle or Nimble Obstructionist in every blue midrange deck or adding the occasional Fulminator Mage will do the trick and get people. Those decks function on a very low land count and have such a high amount of card filtering that they will recover relatively quickly from a Stone Rain. In the meantime, they have cheap and beefy threats backed up by free threats that you have to take care of. If you don’t do anything productive yourself, all the disruption in the world won’t get you there. The only deck apart from those decks themselves that can make effective use of a Stone-Rain strategy are the old and long-forgotten RG beatdown/land destruction decks. In those shells, the LD works effectively as a tempo-component of the deck since you disable their transitioning between game-states. (Might be worth digging out, I don’t know…) In case you really want to beat down on U(x(x(x))) ‘tempo’, let me tell you that any Abzan-related midrange shell is a viable choice.
A final idea that has reached my ears from veteran players in the last weeks is the possibility of brewing a previously unseen creature-focused combo deck. With Prime Speaker Vannifar, Teferi, Time Raveler and several smaller versatile creatues newly introduced into the format, there might be something like a hybrid between a Bant (plus maybe black, for good measure) midrange shell with several infinite combos and many tutors. I heard it is already out there somewhere!

I know that I am repeating myself a lot between my articles and facebook-posts and sometimes come across as stubborn. But I won’t let any norm of humbleness or false tolerance influence me on my path to improving the format, because, in a way, I believe there is some truth to what I argue. Fair, Highlander is a casual format, but it is also a puzzle and people seem to like the institutionalized competitive component as well. And it is for those who want to get better or make the format ‘better’ that I write these articles. So, I rather present you with well-opinionated material that you can reject and ridicule in its entirety as much as you like instead of just puking emotional responses into facebook groups where they eventually get lost and never penetrate the thinking of the broader player base. I am looking forward to hearing your thoughts on this article and am excited to compete at MGM 15.

The key takeaways for this time are:

Accept structural weaknesses and concentrate on the essence of your deck (because, after all, this is the legitimation of its existence). Reconsider your deck composition in light of the new mulligan rule and don’t be afraid of mulliganning (How do you want your opening hand to look like? How do you want your first few turns to play out?)